Without Restraint: Works by Mexican Women Artists from the Daros Latinamerica Collection

Therefore I will continue in English:

It is a pleasure for me to welcome you here to Kunstmuseum Bern tonight to celebrate the opening of the exhibition Without Restraint: Works by Mexican Women Artists from the Daros Latinamerica Collection.

In Without Restraint thirty-five works including photographs, videos, objects, and installations by seven internationally acclaimed women artists from Mexico are exhibited.

All of the works on display were generously loaned by the Daros Latinamerica Collection in Zurich, Europe’s largest and most important collection of contemporary art from Latin America, and also one of the most renowned collections of its kind in the world.

A total of 120 artists are represented in this remarkable collection comprising almost 1300 works.

Only the work of seven out of 120 artists is shown in our exhibition, roughly 6% of the artists in the collection.

So, your question to me might be: “How did you choose them?”

Allow me to share with you some insights into how the exhibition was conceptualized and realized:

In order to mark the celebration of the 70th anniversary of diplomatic relations between Mexico and Switzerland, last year I contacted the curatorial team of Daros Latinamerica Collection in Zurich.

With Without Restraint we wanted to highlight the common preoccupations which emerge from contemporary Mexican art when it is analyzed in context, fostering an intercultural dialogue and exchange between Mexico and Switzerland.

In the holdings of Daros, however, there are a total of fifteen artists of Mexican nationality. Eight of them are men.

The decision to concentrate the selection only on art produced by women has many reasons.

First of all: This is the very first time that an all-women exhibition is mounted out of the holdings of the Daros Latinamerica Collection. Everyone in the team was surprised to find out that this had indeed not been done yet. All together, we agreed that this gap had to be filled.

The multifaceted and thought-provoking works on show here in Bern provide an overview of the most characteristic features of the Mexican contemporary art scene and of its development in recent decades. They were all created between 1994 and 2012.

The exhibition offers the opportunity to critically reflect upon and contextualize women artists’ production in contemporary Mexico.

The works of these seven artists engage with the concept of national and gender identity and challenge the traditional roles and social spaces assigned to women and to minorities by the dominant hierarchies of power.

By using different medias, they overthrow the existing order of everyday life and routine which traps women in a labyrinth of traditional archetypes. Topics such as life and death, the violated body, identity and migration, nature and the metropolis are critically examined and discussed in their works.

The work of these artists speaks about politics, society and gender in Mexico. Their perspective, however, is far away from being just “local”.

Their concerns, hopes and ideas are absolutely global and regard all of us. They addresse the struggle of many women for gender equality and for the empowerement of women and for minorities in general. They want to subvert stereotypes of womanhood, race, and sexual identity—and, in this sense, are a vehicle of dissent from patriarchy.

Our exhibition aims to approach women’s art with attention to the ways in which in Mexico has contributed to the shaping of a new identity in opposition to the traditional emblems of womanhood and of the nation.

The works in the exhibition are arranged both by artist and thematically, following a tripartition centred on the active production of space and on the artists’ effort to inform new social relations and subvert traditional hierarchies of power and gender roles: 1) the domestic space of the home; 2) the spatial female body; 3) the urban space.

The show is located in the museum mezzanine. This apparent spatial “restraint”, however, has a positive twist on the topic of the show. On the one hand because the artists in the show are “without restraint” and the impact of their work cannot be confined or controlled. In this way we were able to create a tension between the domestic, private space and the public museum environment. On the other hand, because the cabinets in the mezzanine give the visitors the opportunity to an intimate reflection on the social topics explored by the artists.

Now, before we proceed to enjoy the works in the show, I would like to warmly thank all those who have worked so hard and helped me to mount this exhibition during the past year.

My special thanks goes to collector Ruth Schmidheiny and president James Koch, of the Board of Directors of the Daros Latinamerica Collection, for supporting this project, as well as to Felicitas Rausch, Käthe Walser, Domingo Eduardo Ramos and Romi Zimmermann for their dedicated commitment to the realization of this exhibition.

I am also grateful to Hans-Michael Herzog, former Artistic Director of the Daros Latinamerica Collection, who planted the first seed of the project in my head and helped me grow it along the way.

Further thanks go to The Mexican Ambassador in Switzerland, Jorge Castro-Valle Kuhne and his team at the Mexican Embassy, particularly the cultural attaché Carlos De Alva Fernández, for their strong support and friendly cooperation; thank you also to Philippe Guex and Catherine Scharf of the Federal Department of Foreign Affairs of Switzerland, who have shown great commitment to this cooperation with the Kunstmuseum Bern.

I would also like to thank Matthias Frehner, who gave me the opportunity to develop this project, and all those colleagues here at Kunstmuseum Bern who have supported me and my endeavour during the long months of its implementation, especially Birgit Achatz and all the technicians who assisted during the hanging of the show.

Last but not least, I would like to thank again our exhibition-sponsor, Zurich Insurance Company, the foundations artEDU Stiftung and Prof. Otto Beisheim Stiftung, another foundation which wishes to remain anonymous, private donors, including Pierre Kottelat, another anonymous donor, and Louis Roederer Champagne. All together they have generously contributed towards the realisation of this project.

I hope you will find the exhibition stimulating and I wish you an inspiring encounter with these exceptional works of Mexican contemporary art. 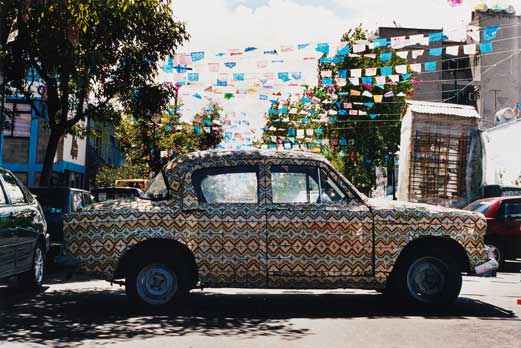