From its first edition in 2011, the Festival del film Locarno post-production showcase Carte Blanche, focusing every year in a selected country, has given the possibility to producers of the most promising films in development in four Latin American countries to present them to industry professionals attending the Festival. During these years the distribution, sales and festival selections of many films has been boosted by this initiative, deeply contributing to important international successes.

Starting from 2015, Carte Blanche Extra will guarantee a continuity to the strong connections that have been created with the previous selected countries through their national promotion agencies: Cinema do Brasil, CinemaChile, Proimagenes Colombia and IMCINE (Mexico). Each of them will invite to Locarno up to four upcoming producers to introduce their works to potential co-producers during the Locarno Industry Days (8 – 10 August, 2015). Additionally, a series of professional lunches with Industry key players will help creating a fertile networking in a productive "Latino's Corner".

"Carte Blanche has quickly become one of the cores of the Locarno Industry Days activities. Carte Blanche Extra strengthens and develops an ongoing relationship with our partners for the benefit of the selected producers."
Nadia Dresti, Locarno's Delegate to the Artistic Direction and Head of International

"The experience of Carte Blanche was one of the best we had in seven years of activities. Great atmosphere, great professionals of the industry and perfect organization!"
André Sturm, Chairman of Cinema do Brasil

"Carte Blanche was for CinemaChile a very important event for the development of the Chilean director's international relations."
Constanza Arena, Executive Director of CinemaChile

"Mexican Cinema has always had a significant place in Locarno and the possibility to strengthen the ties with Locarno Industry Days is exciting."
Monserrat Sánchez Soler, Director of International Affairs of IMCINE

Most of Carte Blanche selected titles benefit from this unique post-production platform, and great networking event:

2013 (CHILE):
Matar a un Hombre (To Kill a Man) by Alejandro Fernandez Almendras, winner of the Carte Blanche 2013 (8.000,00 €) had a succesful Festival run, winning among many others, the Grand Jury Prize at the Sundance Film Festival and Rotterdam's Fipresci Award. Film Factory Entertainment secured its worldwide distribution rights and it was sold to France, Germany, Hong Kong, The Netherlands , the US and many more.

2012 (MEXICO):
Las Lagrimas (The Tears) by Pablo Delgado Sànchez winner of the Carte Blanche 2012 (8.000,00 €), was selected for Rotterdam, Guadalajara, Cartagena de Indias FF and Hong Kong IFF and won the Best First Work mention at Havana Film Festival. The film was released in Mexico in December 2012.

La Horas Muertas (The Empty Hours) by Aarón Fernández was in San Sebastian New Directors, Zürich FF, Sao Paulo IFF and Göteborg IFF and won the Award for Best Artistic Contribution at the Tokyo FF. The Empty Hours was picked-up for International Sales by Urban Distribution International and sold to several countries, including France, Hong Kong, Norway and USA.

2011 (COLOMBIA):
La Playa DC by Juan Andrés Arango was selected for the Un Certain Regard section of the Cannes FF 2012 were it competed for the Camera d'Or. It also took part in Hamburg, Warsaw and Stockholm and won the Best Director Award at the Santiago FF, the Best First Work Award at the Lima FF and was the Colombian Best Foreign Language Film entry for the Academy Awards. It secured worldwide distribution with Doc & Film International and was sold to several territories including Canada, France, Eastern Europe, Malaysia, Portugal, Spain and USA 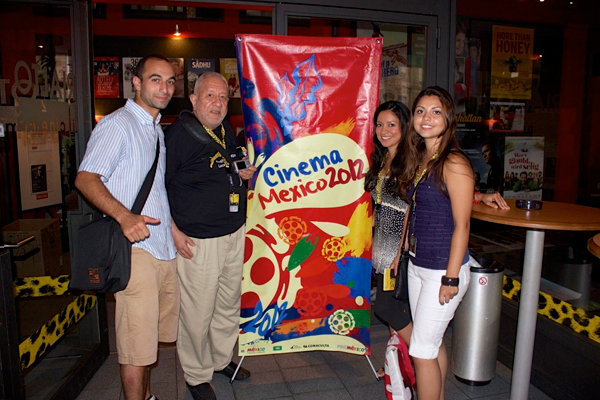